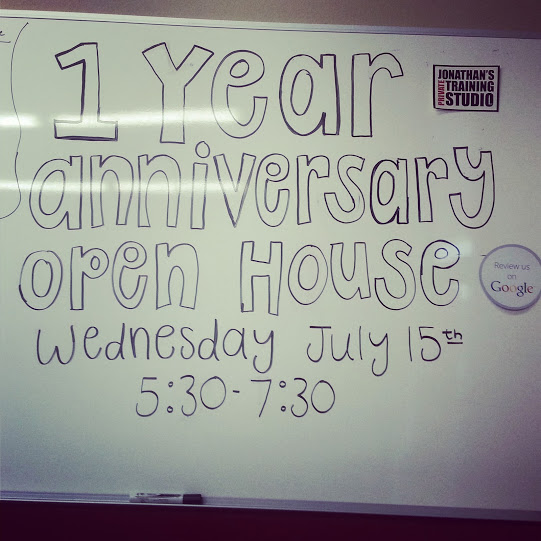 Hey Y’all!      The 1 Year Anniversary Open House is next week! Come out and celebrate 1 Year in Business at Jonathan’s Private Training Studio. We’ll be celebrating from 530 to 730 PM next Wednesday. There will be refreshments, champagne, and some healthy snacks to enjoy! Can’t wait to see everybody there!      I also wanted to share this story with you. Failure is something we all go through, usually over and over again. It feels like the "Masters" at the top of their fields have always been successful, but the fact is that they’ve most likely failed more times than we have. One of my favorite quotes states that "the greatest difference between a Master and a Beginner; is that the Master has failed more times than the Beginner has even tried." See if you can guess who this is before you get to the bottom. Here are this persons "FAILURES": 1832- lost job, defeated for stated legislature 1833- his business went under 1835- love of his life dies 1836- has a nervous breakdown 1838- defeated for Speaker of the House 1843- defeated for Congressional Nomination 1848- lost renomination to Congress 1849- defeated for land officer 1854- defeated for US Senate 1856- defeated for Vice President Nomination 1858- defeated for US Senate
AND FINALLY-
1860- Abraham Lincoln became President of the United States and changed the world while he was at it.
Do NOT be afraid of failure, it is a necessity to have any type of success. See y’all at the Open House!
dallaspersonaltrainerjonathansloanfitnessjonathansprivatetrainingstudiojsloanfitoakcliffpersonaltrainerpersonaltrainer