You’ve probably heard the study about rats and addiction. In this study, a rat is placed in a completely empty cage. The rat only has access to two containers which he can drink from; one container is filled with water, the other container is filled with what is basically liquid cocaine. This study proved repeatedly, 100% of the time, that the rat will always choose cocaine over water. And 100% of the time, the rats would choose the cocaine to the point that they would overdose and die. The scientists who performed this study concluded that all mammals (including people) will also always choose drugs over what they actually need given the choice.

Pretty simple right? But there’s another study that was done that completely disproves this conclusion that I find absolutely fascinating. It’s called the Ratopia Study. In this study, the scientists basically created a Rat Heaven which they call Ratopia. In Ratopia, a rat has everything it could possibly want; lots of rats to hang out with and mate with, plenty of space, unlimited food, colorful balls to play with, yarn, little tunnels, and so on. In the center of Ratopia are those same two liquid containers, one is filled with the liquid cocaine, and the other is filled with water. Now this is what’s fascinating, no rat has ever overdosed on cocaine in Ratopia. In fact, the rats barely drink from it at all, and even when they do, it’s never to the point of inebriation. The rats only drink from the water container on most days. I would compare it to a human that only has a few drinks every once in awhile (yes I know cocaine is worse than alcohol).

So why is that? Why do the rats overdose in the first study but live happy, overdose free lives in Ratopia??? It’s because of how the rats feel about their cage. In the first study, the rat is all alone and has literally nothing else to do besides sit, sleep, and drink. In Ratopia, its’ the complete opposite. The rats LOVE their cage because it isn’t a cage at all; all their needs of love, sex, friendship, play, exercise, mental stimulation, etc. are all at their disposal all the time!

We all are addicted to something; whether it be cocaine, alcohol, tobacco, or even things we don’t think of like watching TV or checking your cell phone. Ask yourself if this is an addiction that you want to keep. If it’s not, then focus less on quitting and more on creating. If you make a few changes to your cage, the addiction can get rid of itself.

I discovered that I really love swimming outside after my recent Mexico trip. So one small change I have made is gaining access to an outdoor pool so I can spend some time everyday doing something that I enjoy. This hasn’t gotten rid of my TV addiction, but it does take time away from it. Now it’s your turn to figure out what is missing from your cage and find a way to change it! You’ll enjoy your life more, be present more, and you won’t feel like you live in a cage anymore.

Where Are You Getting Your Supplements From?

If you’ve ever trained with me, you know I’m not a big fan of supplements. I worked at a GNC store for 2 years after college (along with being a personal trainer of course!), and the things I learned about the supplement industry made me feel like I was selling poison to people. I had no idea how toxic most of the things in supplement stores are, or how ineffective the “safe” stuff was.

Most of the vitamins and minerals that are sold in the supplement industry; are of inferior quality, possibly something else altogether, or at best dissolve before the body has a chance to process 20% of the “nutrients” it contains. However, there are good supplements out there, but most of them are provided by Science Laboratories. The three that I’ve bought from and trust are Metagenics, Thorne Research, and Douglas Laboratories. I use a Vitamin D supplement from Douglas Laboratories every day.

If you are taking any supplements right now, make sure to research that you’re taking quality supplements from a trust-worthy manufacturer. The last I checked, the supplement industry is worth over 30 Billion total, and the government has virtually nobody regulating this industry! So make sure to take charge of your own health and do some research before buying supplements.

Also, Please do not forget to Vote for us in the Oak Cliff Advocate Magazine’s Best of the Best of Oak Cliff competition. We are in the running for Oak Cliff’s Favorite Workout Spot, and we can WIN with your Votes!!! Click on the link below to vote. You can Vote everyday!

The Most Neglected Mobility Practice

Wrists are apart of the body that 99% of people never even think to stretch (other than rock climbers and gymnasts). But its EXTREMELY crucial to not only the health of your wrists, but also your elbows, shoulders, and scapula.

If you suffer from elbow tendinitis, wrist pain, loss of range of motion in your arms & shoulders; this will undoubtedly help. Make this apart of your morning daily routine or apart of your workout warmup. You can even do it in front of the TV! If you do this routine everyday (less than 7 minutes a day) for a couple weeks, you’ll be amazed at the difference!

The Goal and Execution Workshop is this Wednesday, the 4th from 7:30pm to 8:30pm! Bring a pen a paper and be ready to write down some notes and start forming your vision of your amazing life!! Here’s a clip from the last workshop I held. I love the reference of the greatest pilot and his plane. A pilot has to have so much planned out just for a 1 hour flight; his destination, weather, speed, desired altitude, a backup plan for when things go wrong, and a TON more. ALL of these details are essential to the pilot reaching his destination safely. Soooooo much thought and planning is put into each flight. Yet for some reason, most people don’t put that same effort, thinking, and planning towards their life. If you want An amazing life, first you have to figure out your destination, then you plan out how you’re going to get there, and last but most important, take ACTION towards that destination consistently everyday! “What if something goes wrong or my plan changes?”- make an adjustment, and keep going!

Common Mistake Most People Make in Their Warmup

One of the biggest mistakes almost everybody makes in their workout happens during their warm up. Most people walk into the gym and immediately start doing static stretching, aka stretching without movement. The problem with that is that our muscles are elastic, they need a certain amount of blood flow to happen before the muscle is WARM enough to perform a static stretch. When you do static stretching without warming up first, you actually TEAR your muscles slightly instead of stretch them. This obviously hinders the workout you’re warming up for, and also slows your results; due to the fact that you are starting each workout with tons of tiny micro-tears in muscle fibers you were just stretching.

So never stretch unless you are already warm. The best way to warm up is to move; do some crawling, hanging, mobility, some light cardio, something that will get your heart rate up and increase your blood flow for at least 5-10 minutes. Static stretching is best left for post workout cool downs.

Check out these feet!!! You’re either looking at that being totally grossed out, or you’re like me and are fascinated by how this mans feet have developed. These are the feet of an Ashaninka Indian who lives in a rainforest in the upper Amazon Basin of Peru. His feet look like this because he doesn’t wear shoes! That’s right. He walks all over the treacherous rainforest in bare feet all the time, and this is the result; an incredibly strong foundation that provides soooooo much support to his body it’s hard for most of us to fathom. This is what most people’s feet should look like; hard, tough, BIG, ugly, muscular, and super calisced. But our feet are soft, weak, dainty, and not as ugly as this. Which is one of the many reasons why so many people have had so many injuries and continually have physical pains and aches; their foundation is weak so the rest of the structure (their body) has to take on more stress than it’s designed too. Start being barefoot as often as possible, use your toes, walk on the grass and feel the earth with your feet, strengthen your foundation. Photo credit @franslanting

Never doubt yourself. It’s ok to question yourself, it’s ok if sometimes you feel weak. But no matter the question, no matter the feeling, you’re mindset never changes; I know that I will turn my dreams into reality, period.
Apr
29

Pics from the 3 Year Anniversary Party!

The 3 Year Anniversary Party was Awesome Tuesday night! Thank you so much to everybody that came to celebrate and has supported my business over the past 3 years!!! I’m lucky to have such an amazing group of loyal and hard working MOVERS to train!
Apr
17 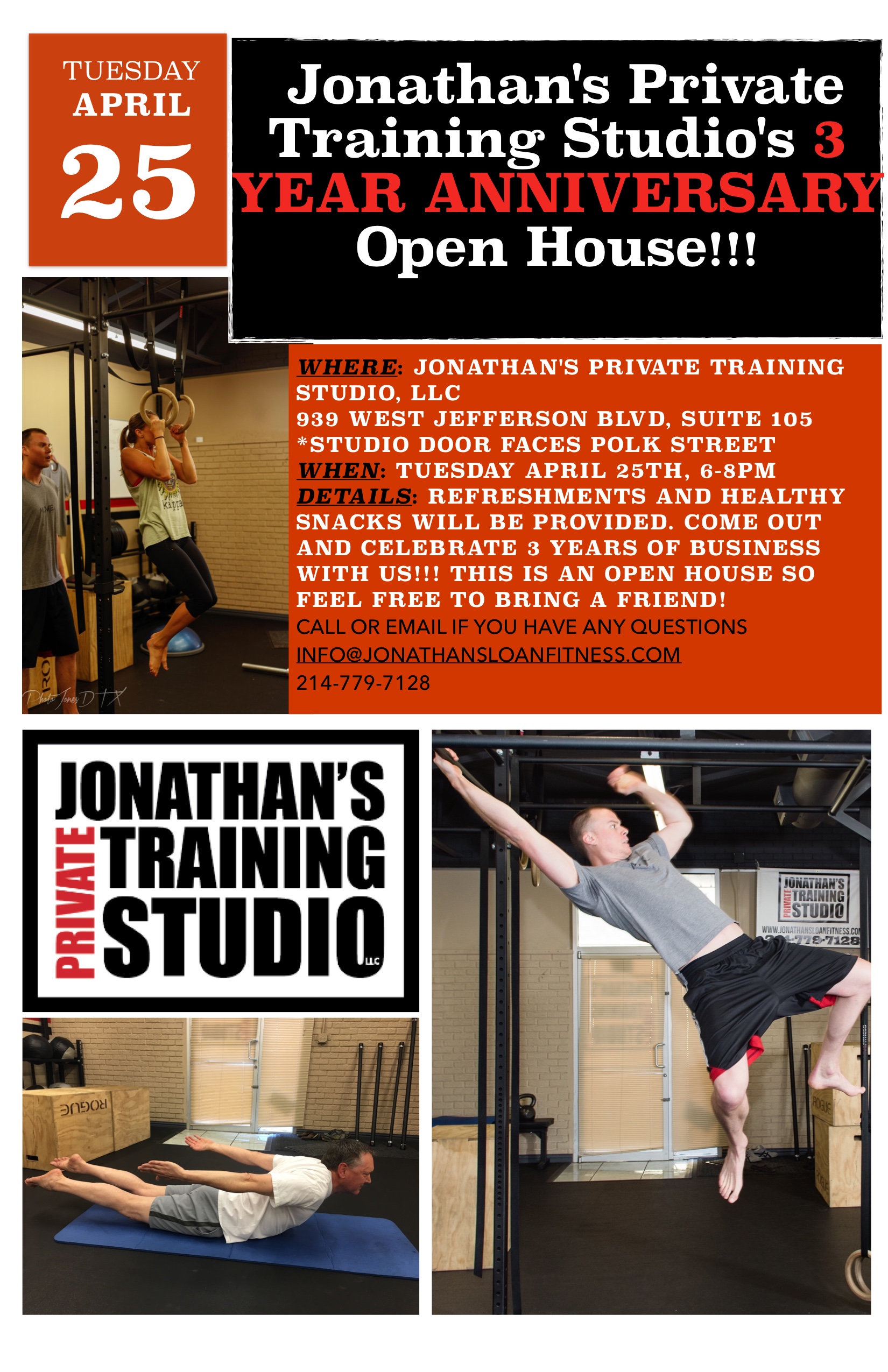 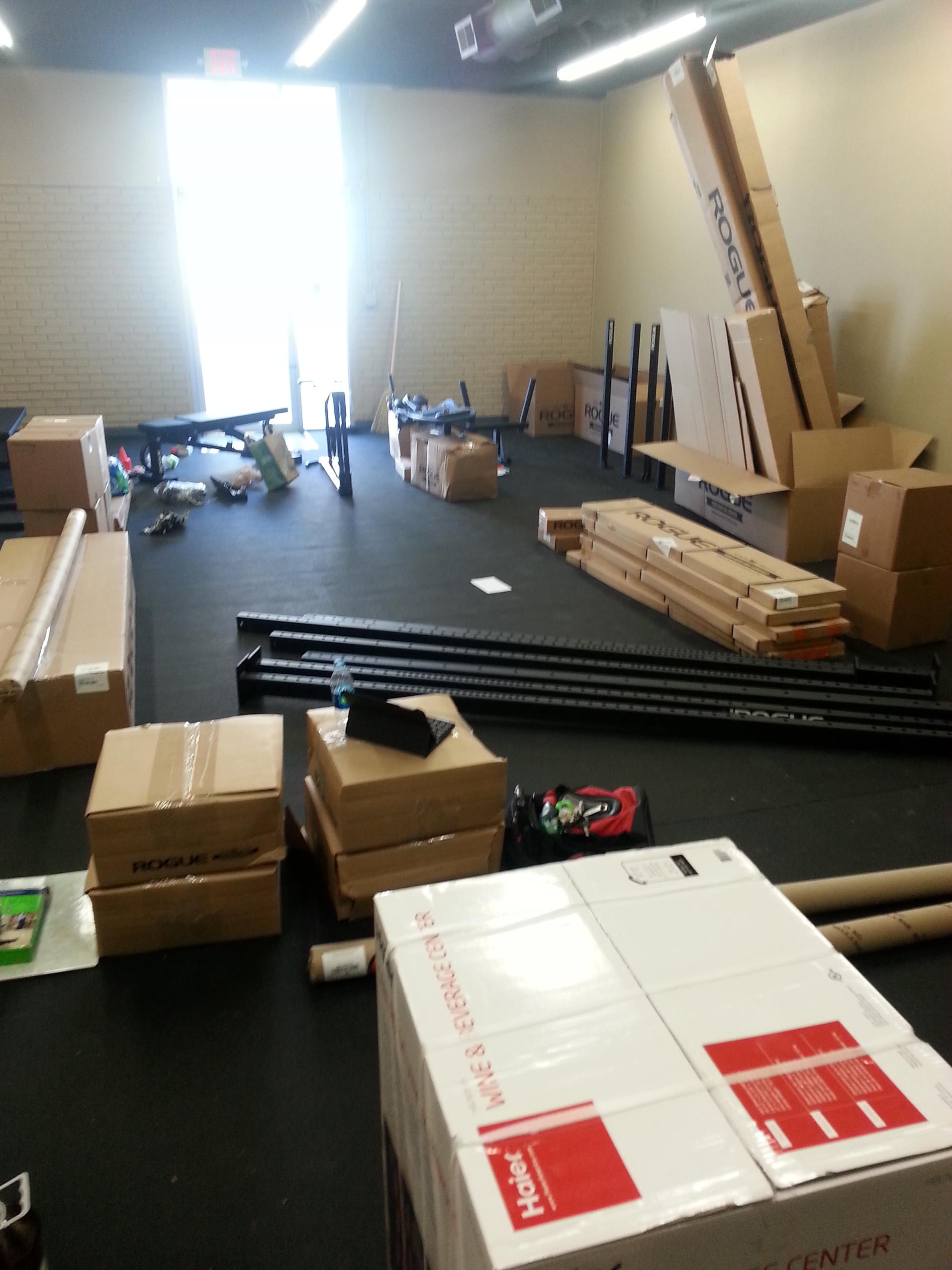 "People overestimate what they can do in a couple weeks or a few months, and underestimate what they can do in a year, 5 years, or a couple decades. " Luckily, I found all my old pictures I took from when I first set up my studio. It’s really cool to see what it was and what it has become for me personally. My 3 Year Business Anniversary Celebration is coming up Tuesday, April 25th from 6-8PM at the studio. I’ll have some champagne and some healthy snacks for everybody to enjoy! I hope to see everybody there. 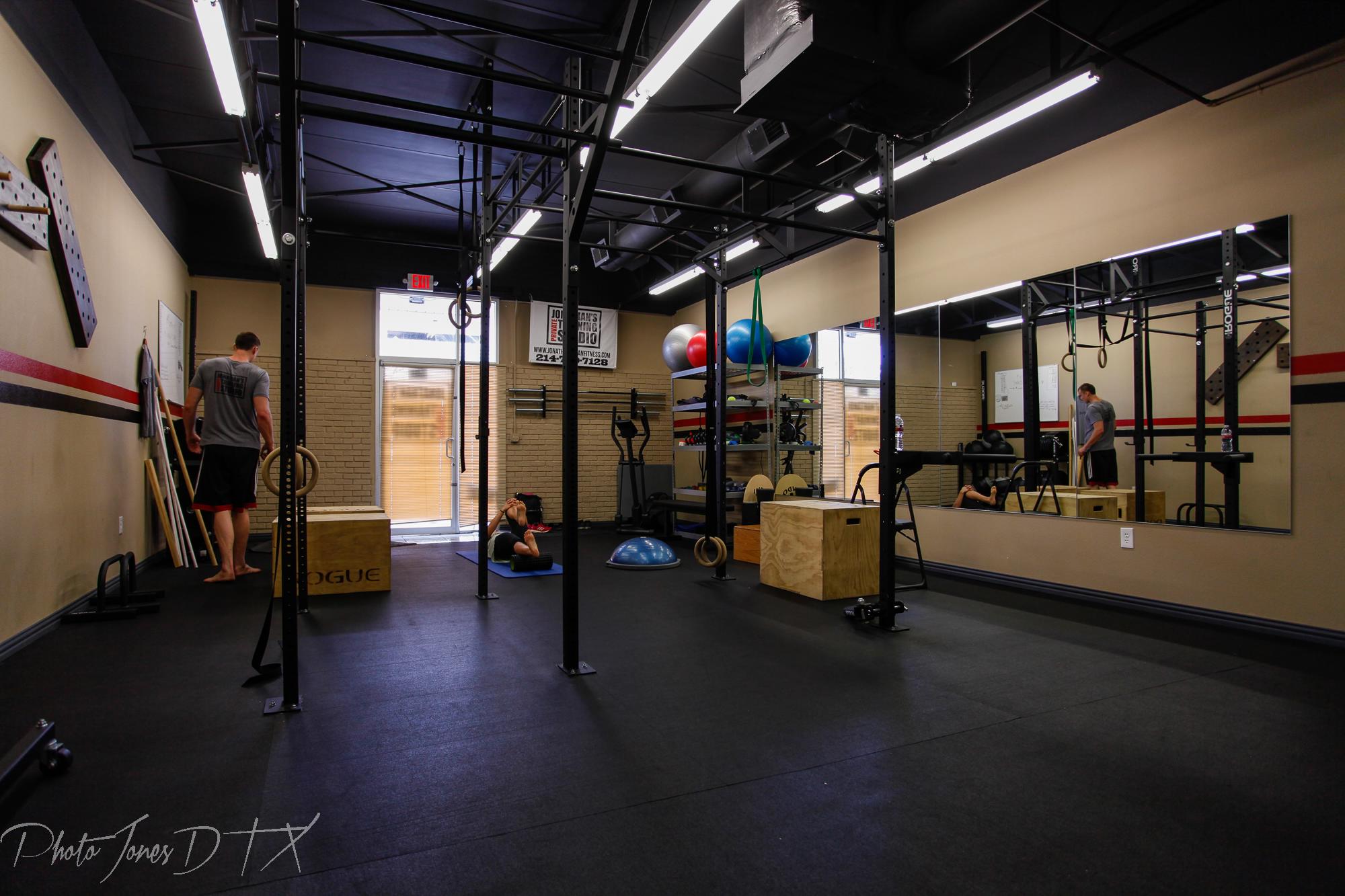